Through the Veil: Intro and Astromancers

Twelve constellations hang in a ring around the earth. Each turning as a spoke in a wheel. Far below lies the earth and all that is in it. This fades to the physical forms of mighty gods butchering one of their own. The god is shattered, falling and falling. He crashes through one of the four bridges linking heaven and earth, destroying it utterly. The world above and below is plunged into darkness. The wheel no longer turns. The gods have returned to their constellations, a red star now lingers among each one.

Twelve gods hang in the firmament.

Around the Great Pillar they spin.

Each revolution of the Wheel crushing the age before.

Each revolution of the Wheel birthing an age anew.

Outside, the looming darkness hungers.

Eleven, they gathered in the firmament,

The infant age does not come, yet the birth pangs shudder.

Outside, the looming darkness enters.

The drama of the stars ends. You lie flat on your back. You see only darkness.

Feel the ache of bones lying upon cold basalt,

Hear the voices without words like those in a dream,

Do'st thou not learn in thy living?

Four are the directions of the wind,

her huntresses seeking prey, its demise to find.

Six is the form that magic takes,

in the eyes of the divine.

Yet greater strength is found in their kings

to bring the end of all things.

Cutscene ends. A dark veil slowly pulls away. Who are you?

Coveting a time now past. Longing for a distant lover. Bittersweet memories of adventure and joy culminate in a legendary tragedy. This is the lot of the astromancer.

Begin play with three earwax candles, a papyrus writing set with ink, a clay pot of dried fruit, and the accoutrement of your worship. 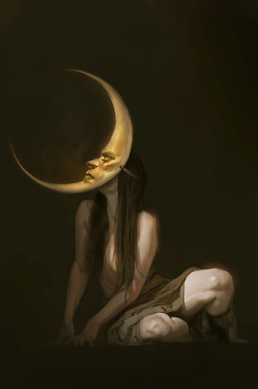 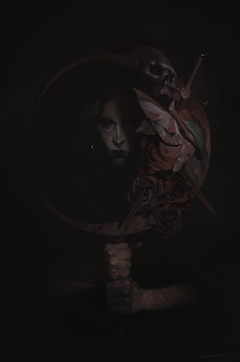 Descend into the moonlit realm. Shadows climb walls and long dead spirits are seen passing through the air. In darkness you are invisible and in light you are a black void. Replace all your rolls with Contempt rolls for [sum] rounds.

The target’s next [dice] stat tests are rolled using their opposite stat. Useable as a maneuver. Creates a person-sized oval mirror.

For [sum] rounds, you may step intoand out of deep shadows or mirrors within line of sight. More may be possible.

Create a shadow of yourself for [sum] rounds. The shadow is a duplicate of yourself, but cannot cast spells and has 1hp.

Deal [sum] damage to a target you’re touching. + Contempt if you are whispering beautiful secrets into their ear.

A thin bead of fire stretched in a circle around the moon. Pull it down and bring it to hand. This flaming whip is a Contempt weapon and lasts as many rounds. May use a maneuver to grab and ignite a target for [dice] damage ongoing.

The moon shines a fel red light as you warn of dooms and dangers. Camel and horses bray. Hyena, crow, and cockroaches are attracted. Mooks with [dice] HD or less flee and monsters fall into despair.

Define a course of action and a consequence in Contempt + [sum] words. Your target may chose which to abide by. This cannot kill the target if they have more HD than [dice].

Create Contempt shadows of yourself for [sum] rounds. The shadows are a duplicate of yourself and have 1hp.

Cats of the mirror realm slink in from reflective surfaces of your choice or from shadows of their own. Esoteric knowledge is theirs in full, but charity they have for no man. If cast with [dice]:

1- Liter of mundane sized cats with [sum] HP arrive. Each has a scroll or item in their tail.

2- Two dog sized tigers with [sum] hp split among them pounce on the weakest prey. If fed in blood they may grant a mortal a wish within their power.

3- Marshmoff, the Skinned now serves in this place. He once lost a game of riddles with the previous inhabitant. He was once knowledgeable about art of kastromancy and of beast husbandry.

4- One of the Sphinx who watches the arc of time has always been here. She knoweth your name.

Through the Veil: Intro and Astromancers

Roll the intro cutscene. Twelve constellations hang in a ring around the earth. Each turning as a spoke in a wheel. Far below lies the eart...